A power of attorney is a document that legally grants an individual (agent) authority to act on behalf of another person (principal).

It’s typically applicable in situations where an agent is required to make decisions concerning financial or healthcare matters in the unfortunate event of incapacitation or disablement.

The Pennsylvania power of attorney differs from other states. It’s a little more difficult because there’s no form provided. However, although there’s no specific format to be used, there’s a notice and acknowledgment provision that must be included at the POA’s beginning.

In terms of power, the Pennsylvania durable power of attorney gives someone (an agent or attorney in fact) limited or equal power to the principal. 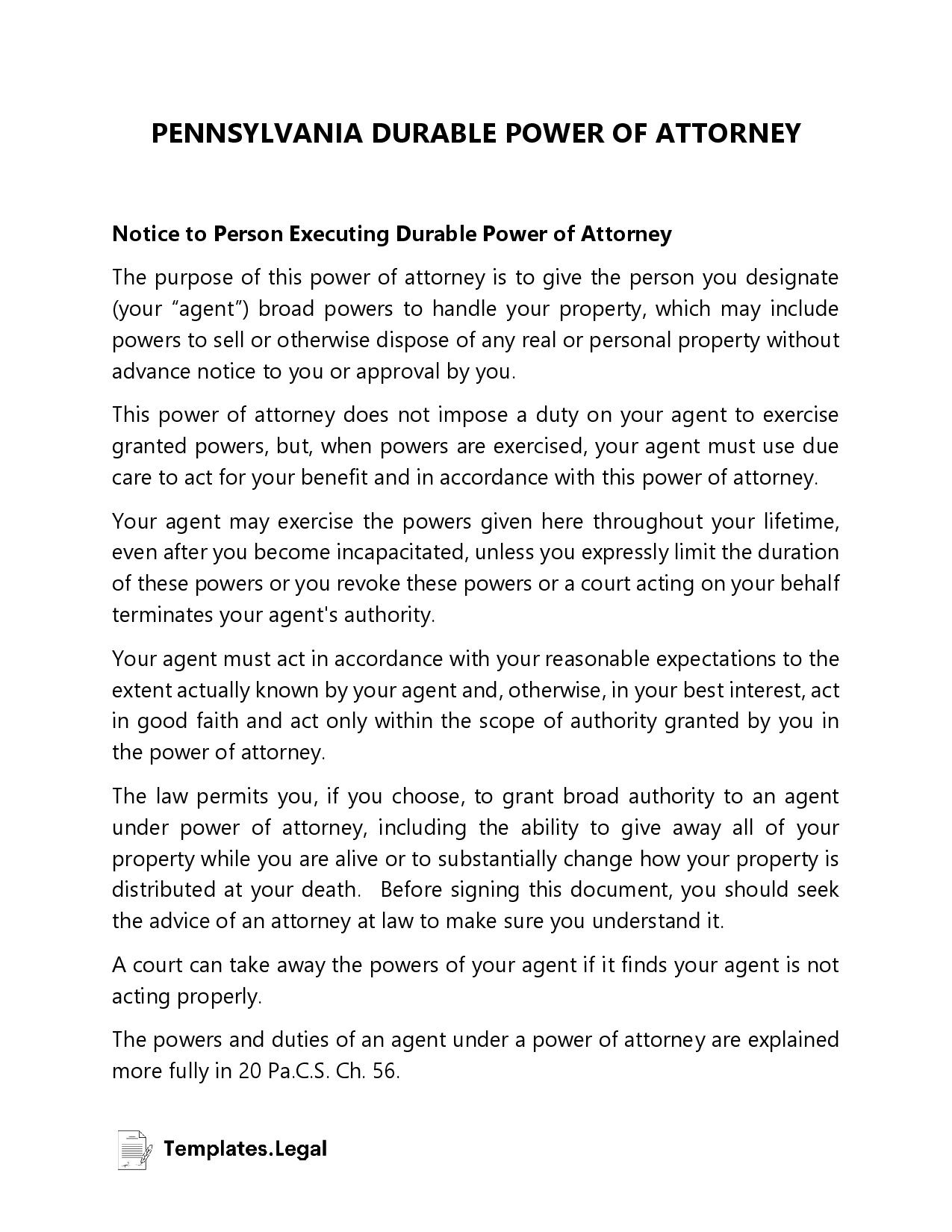 The attorney appointed doesn’t have to be an actual attorney—just a person that the principal trusts with their matters. The main point of a durable power of attorney is that a clause keeps the agent’s power even if the principal is incapacitated or unable to make decisions. 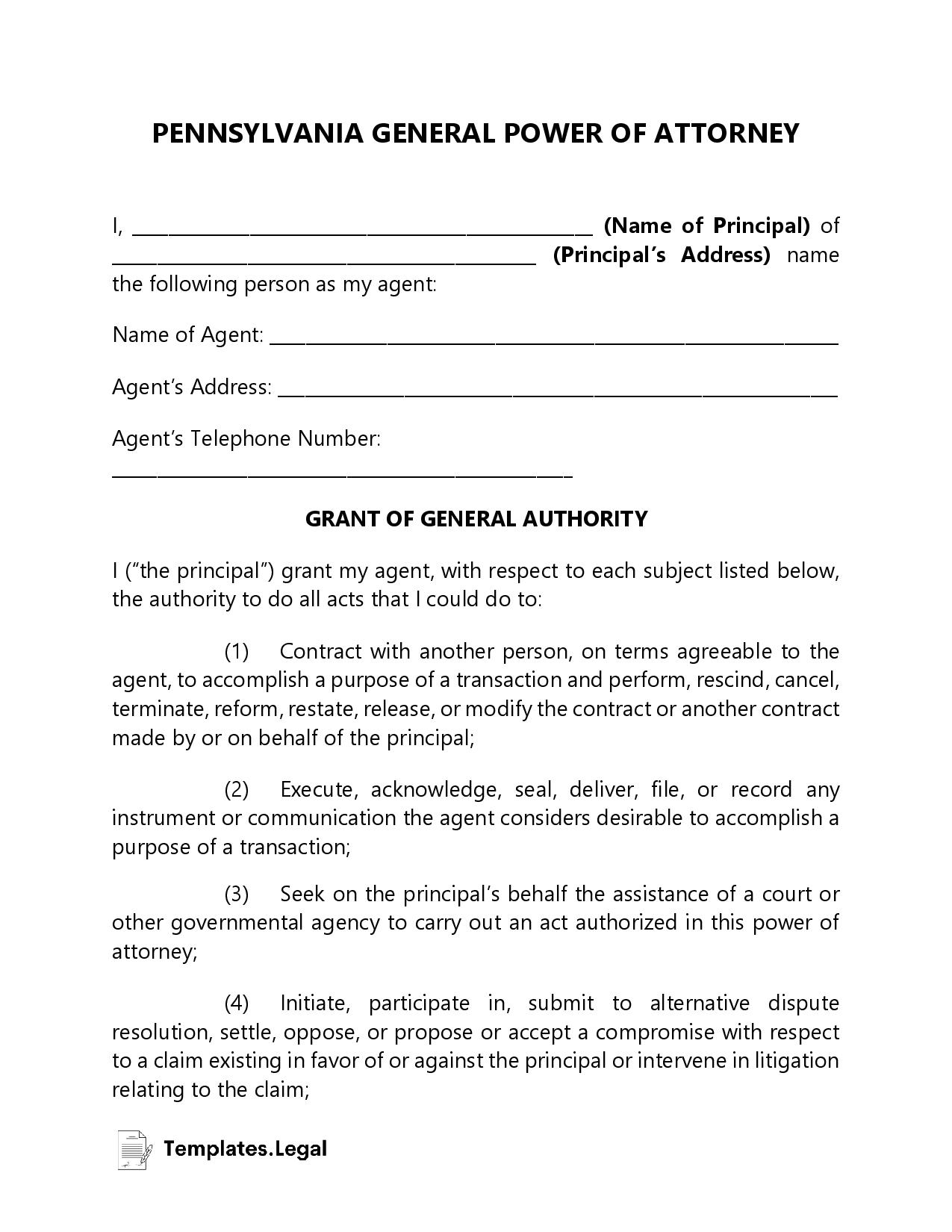 The Pennsylvania limited power of attorney grants the agent powers over a limited period stated in the document. The power is mainly for a specific and limited purpose, such as handling real estate transactions. 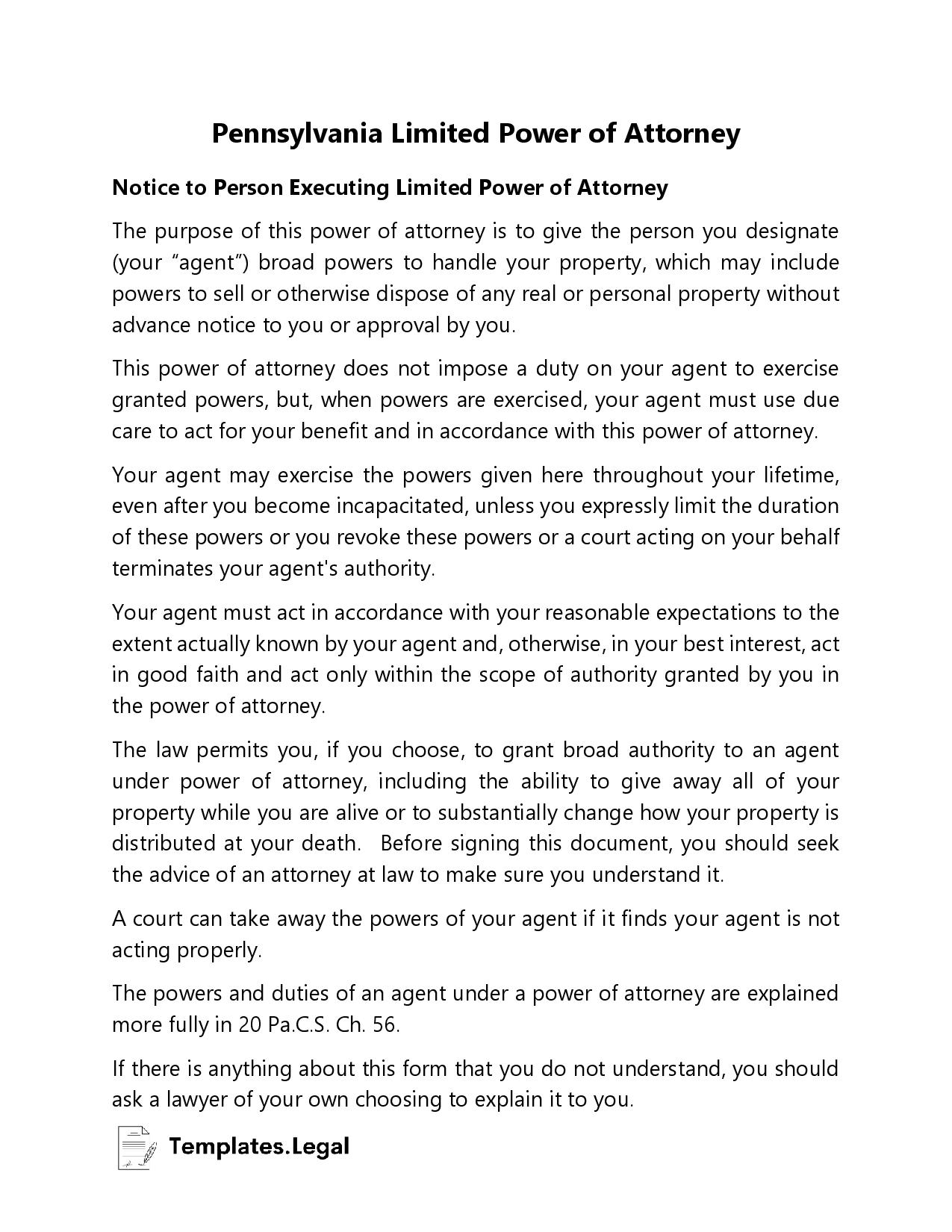 It’s a form whereby someone appoints an agent (close friend, relative, or spouse) that can make decisions regarding their healthcare and represent them in unfortunate situations whereby they can’t communicate effectively or make reasonable decisions. 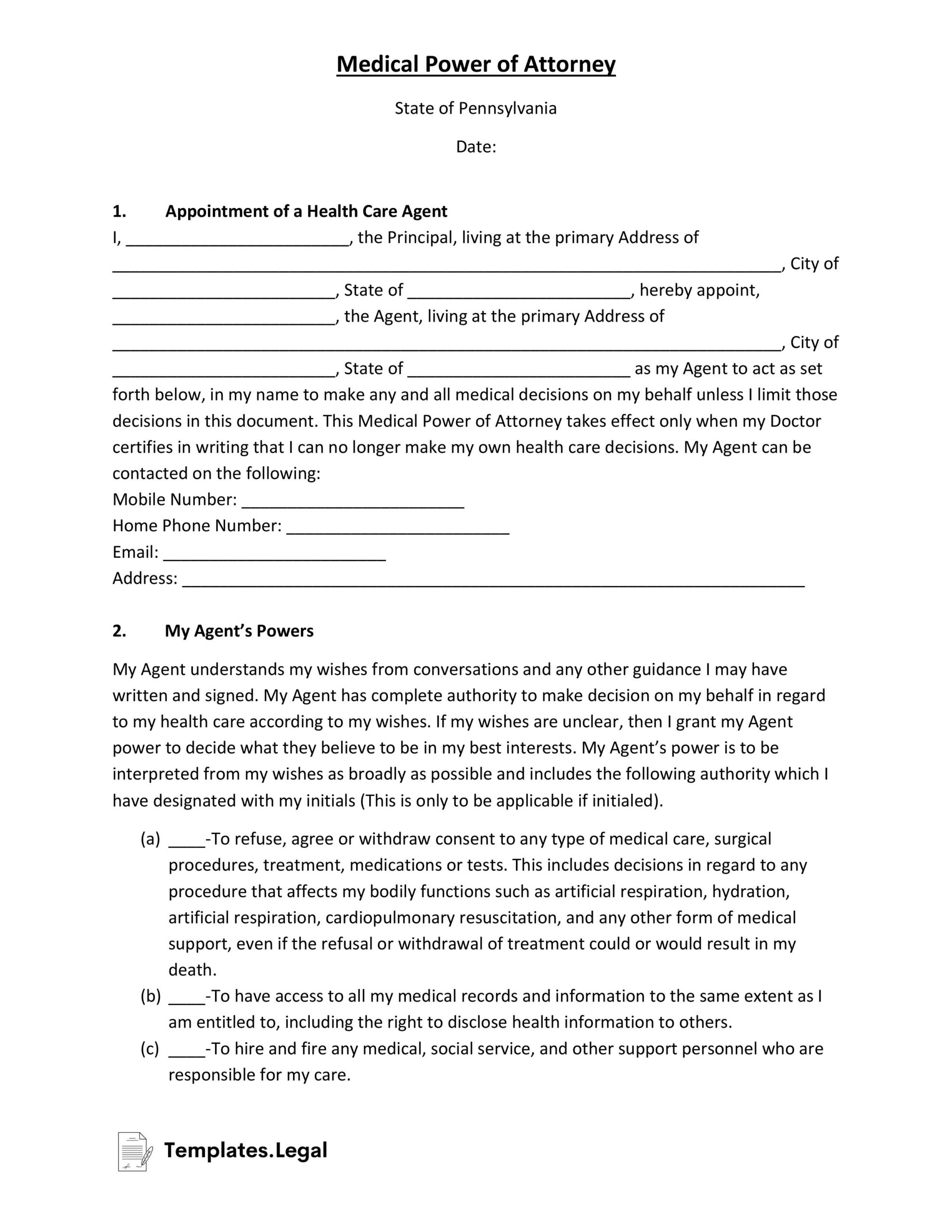 This form allows parents (principal) to legally assign a temporary guardian (attorney-in-fact or agent) to take up the responsibility of caring for their children. 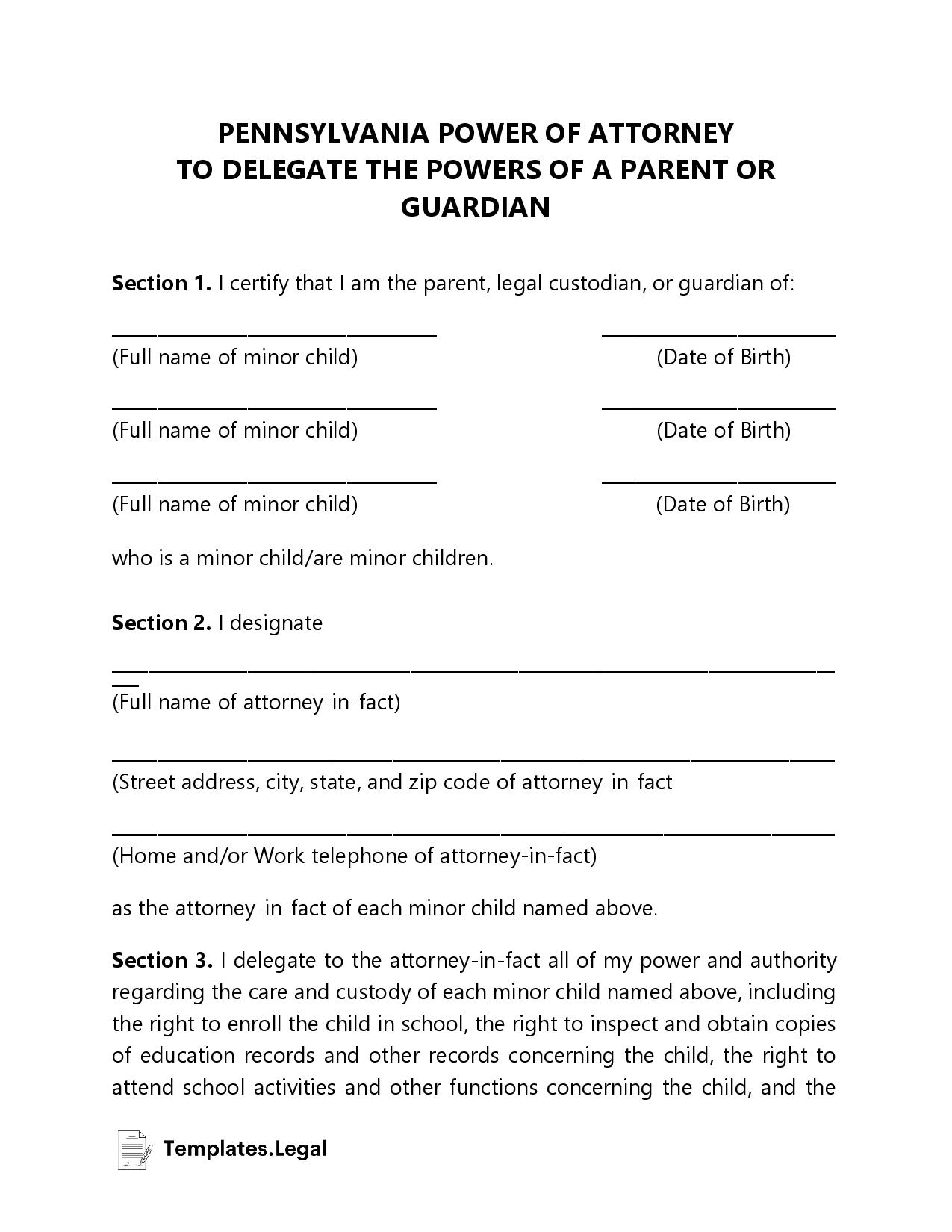 Typically, this would be necessary when the parents are unavailable due to military deployment, illness, work-related travel, family commitments, or prolonged absence. However, it’s valid for six months.

According to the child’s needs, the minor power of attorney form for Pennsylvania grants full or limited powers.

Here are some frequently asked questions:

Pennsylvania law requires that the principal signs it in the presence of two witnesses, both aged over 18. The power of attorney form should also be dated and signed.

You can download a free Pennsylvania power of attorney form from the government website, though there’s technically no specific format necessary.

To revoke a power of attorney in Pennsylvania, the principal should create a written document referred to as a Revocation of Power of Attorney, declaring that they no longer require an agent’s services.

You notarize a power of attorney Pennsylvania by attaching a completed acknowledgment form to the POA and asserting that the principal approached you willfully and that the signature on the form is the principal’s.