The term “power of attorney” refers to a legal arrangement in which one person gives another the authority to make decisions on their behalf. The person granting PoA is usually known as the “principal,” while the person accepting PoA is known as the “agent.”

Rhode Island power of attorney can take several different forms. Each form delineates the extent and limits of the power bestowed upon the agent, determining the types of decisions they’re permitted to make.

Durable PoA arrangements include a “durable” clause that enables the agent to remain in control of the principal’s affairs even in the case of their death or incapacitation. 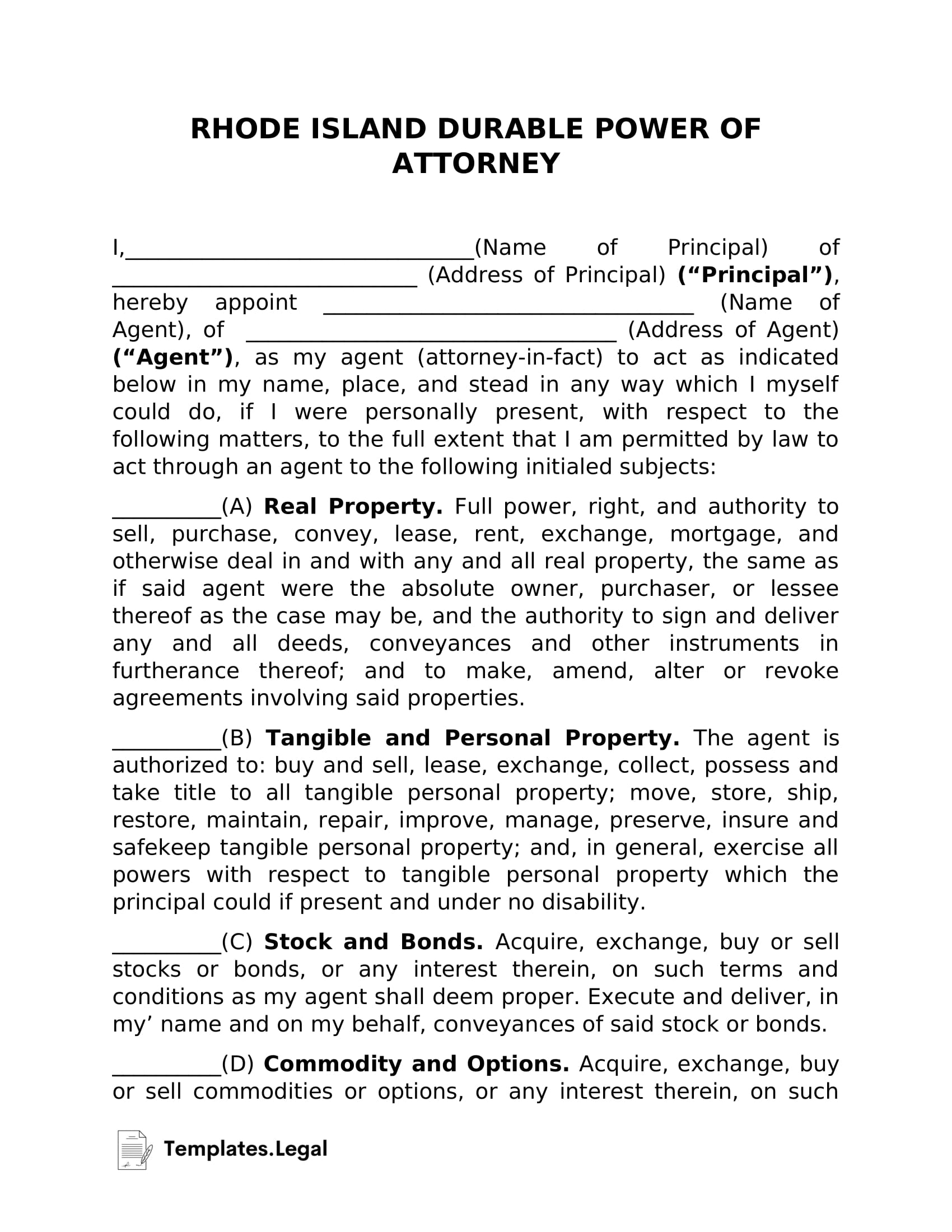 Under Rhode Island law, a principal can confer an attorney’s durable power on more than one agent and elect to have multiple agents act jointly (together) or severally (individually). 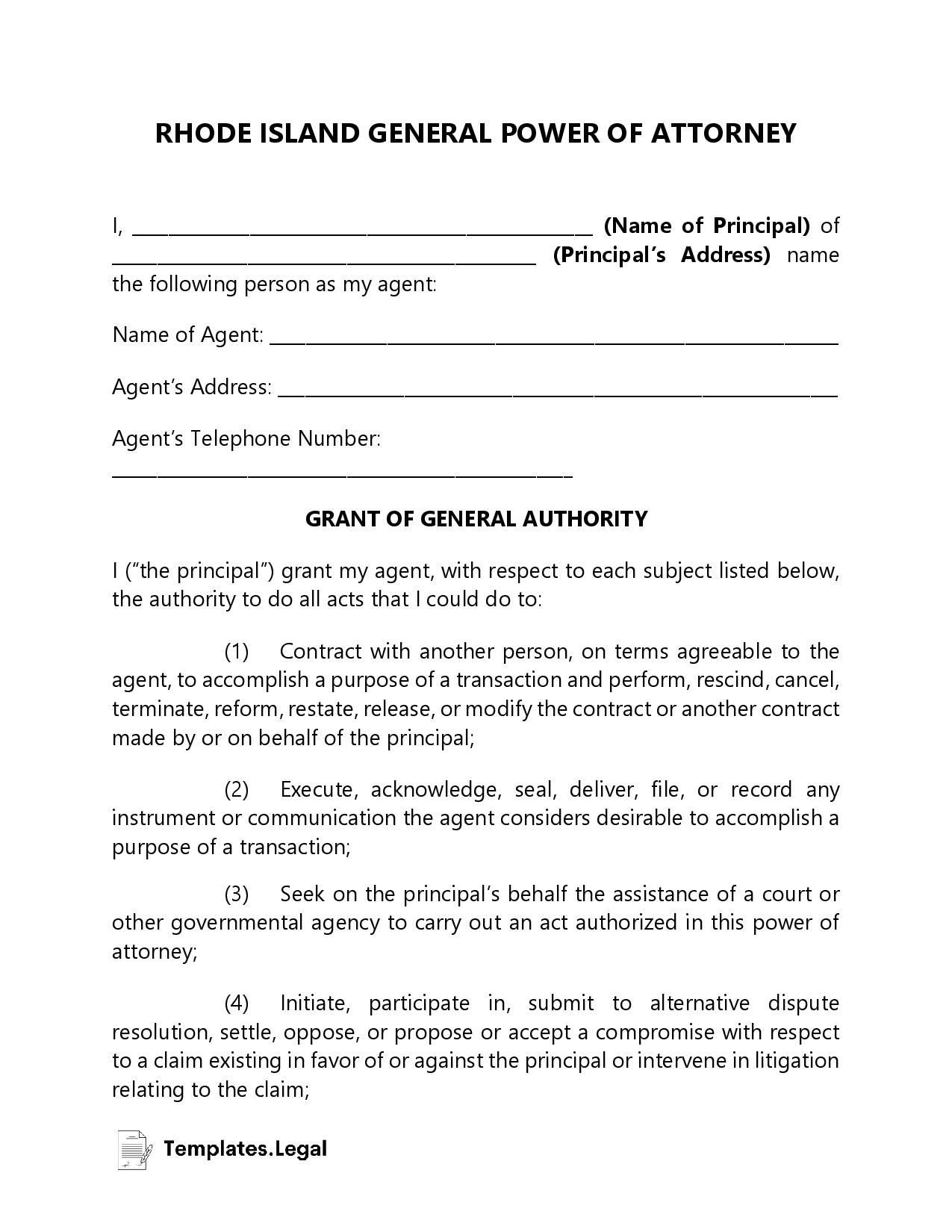 making decisions of various kinds. This authority commonly extends to important matters like:

Under Rhode Island law, the general power of attorney ends when the principal dies, becomes incapacitated, or formally revokes the privilege.

The limited PoA in Rhode Island confines the agent’s legal power to a specific task or category of actions, such as buying or selling property or paying bills. 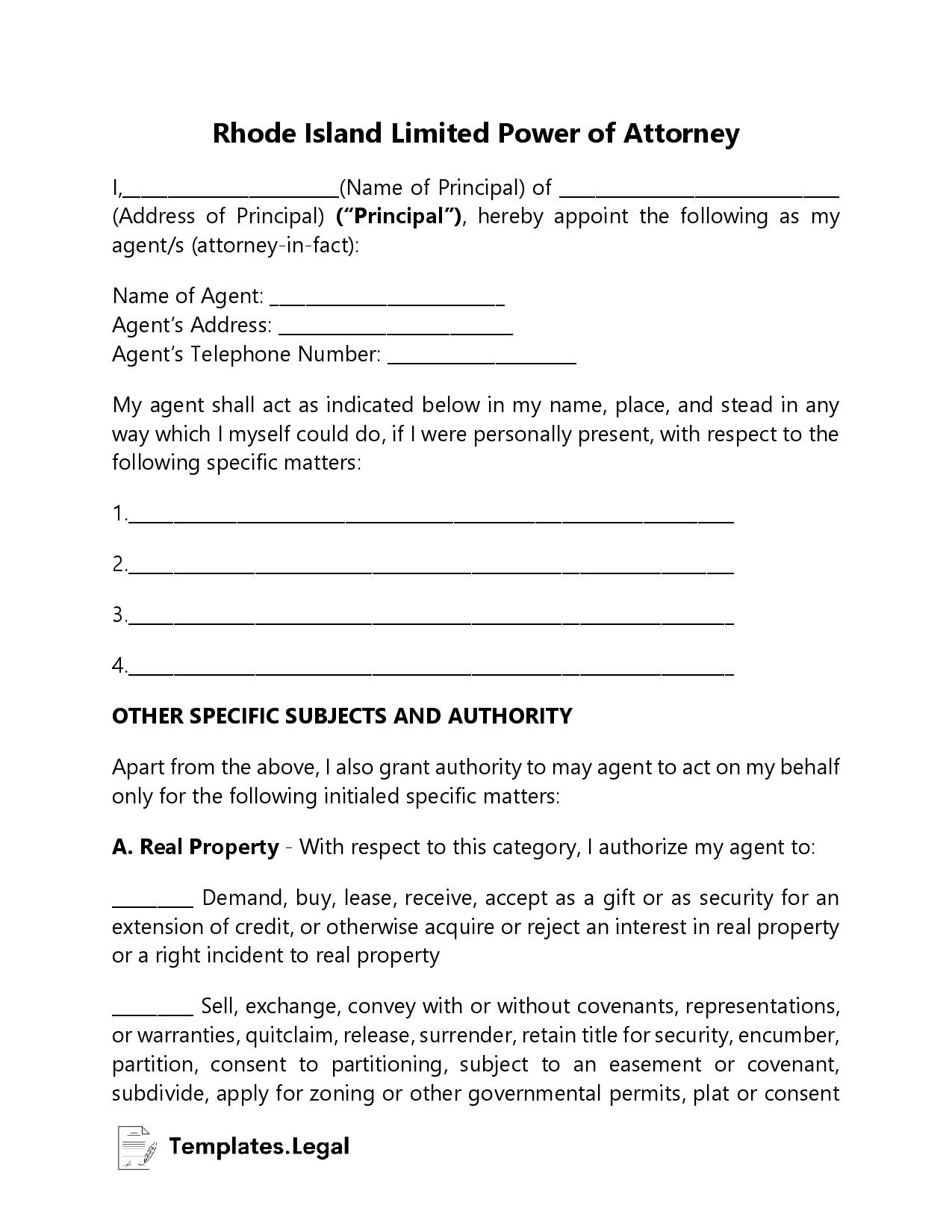 This form is sometimes called “special” since it deals with a particular set of circumstances.

Medical PoA relates specifically to the health and wellbeing of the principal. These agents are often tasked with making decisions like where to seek treatment and whether or not to consent to certain procedures. 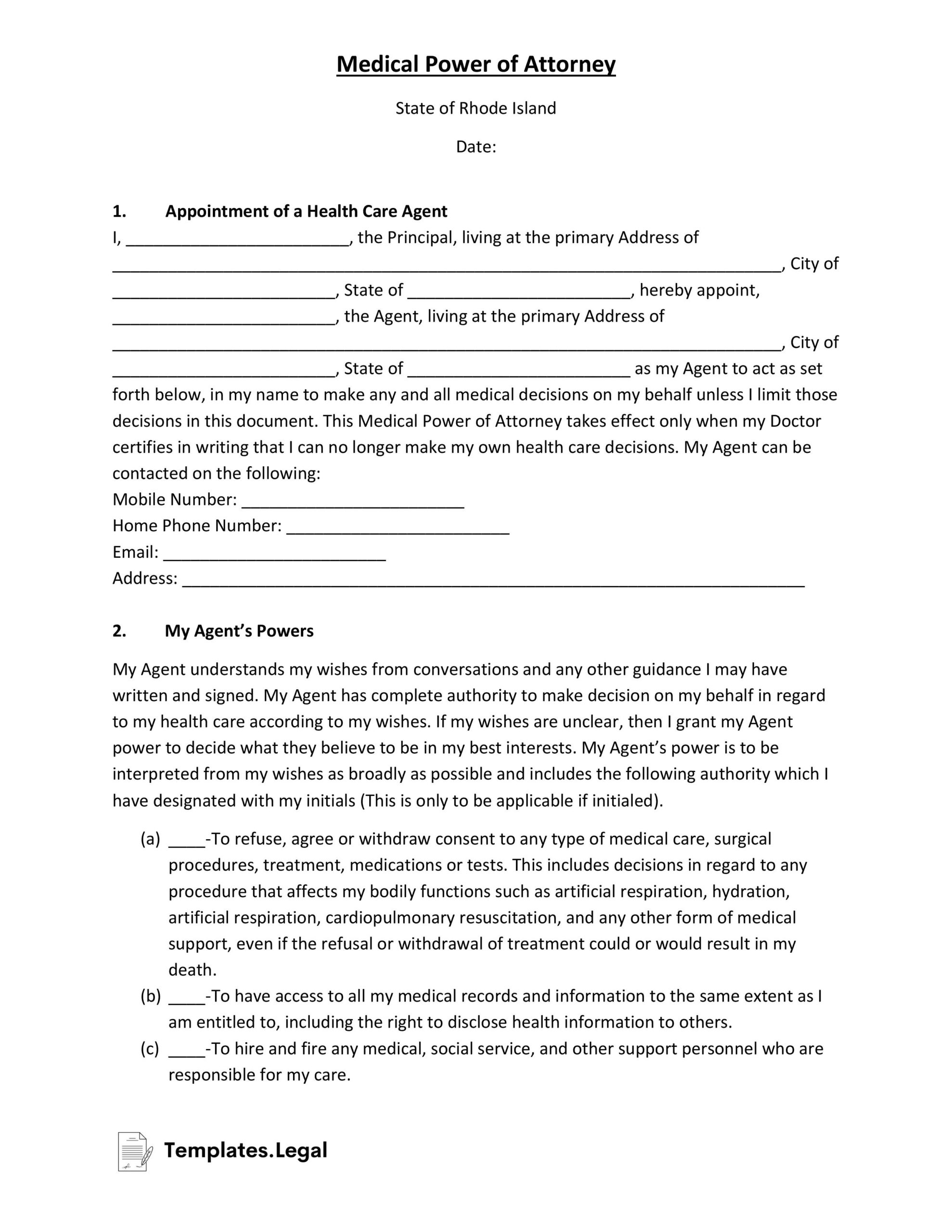 In Rhode Island, medical PoA is recognized as a form of advance directive.

Guardian of Minor power of attorney empowers the agent with legal discretion in the care of the principal’s children or other minors in their charge. In this sort of arrangement, the agent is given some degree of legal guardianship, which is outlined in the terms set forth by the principal. 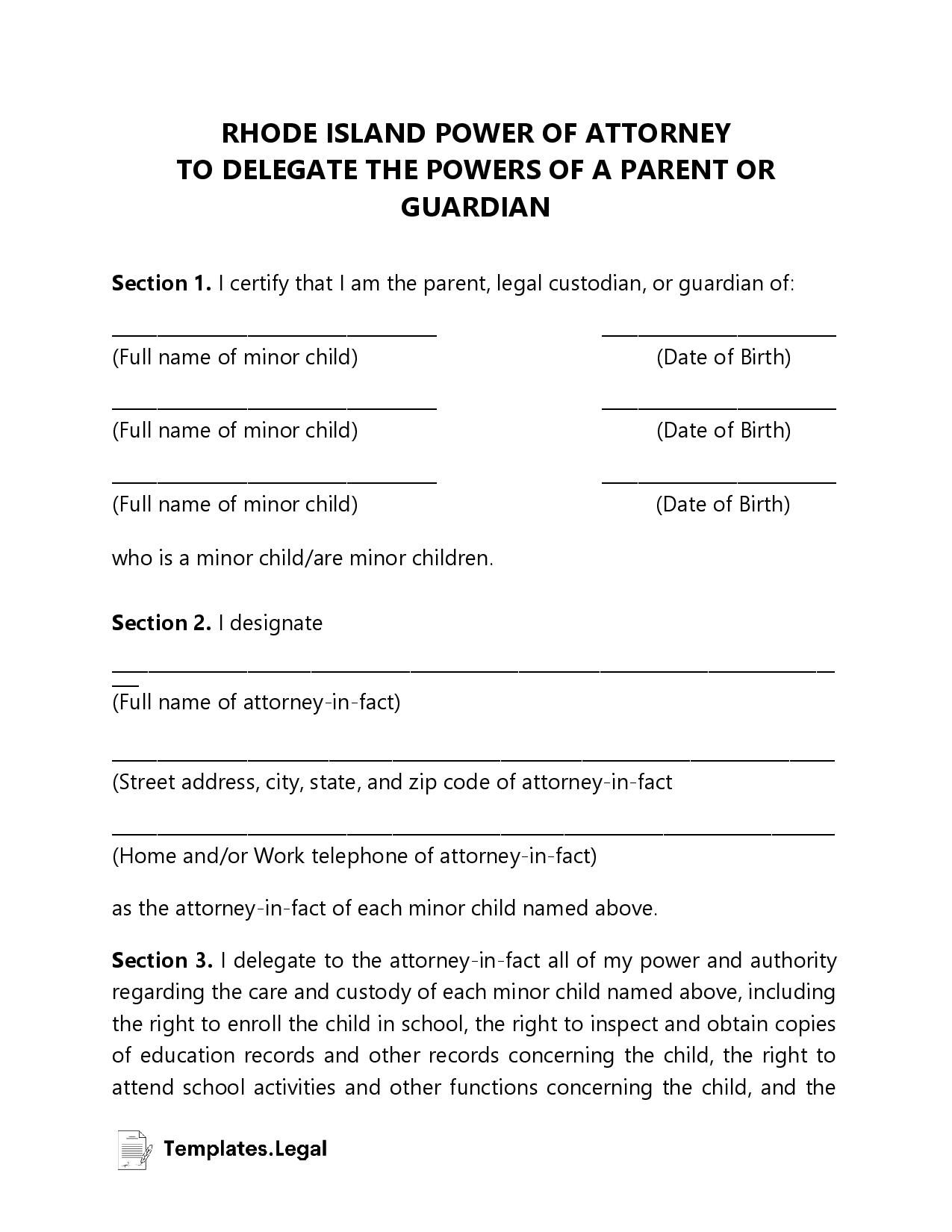 Following are answers for some of the most common questions about power of attorney in the state of Rhode Island.

To receive power of attorney, you must be designated as the principal’s acting agent and sign and submit the free Rhode Island power of attorney form for the type of PoA you’ll be enacting.

As the principal, you have the right to withdraw power of attorney at any time by filling a Revocation of Power of Attorney form in Rhode Island and having it signed by a notary. The only exception to this is if you’ve conferred durable PoA to the existing agent.

When signing a document as acting PoA, you’ll need to provide a signature for both the

principal you’re representing and yourself. You’ll also need to present a valid government-issued ID and your agreement at the signing.