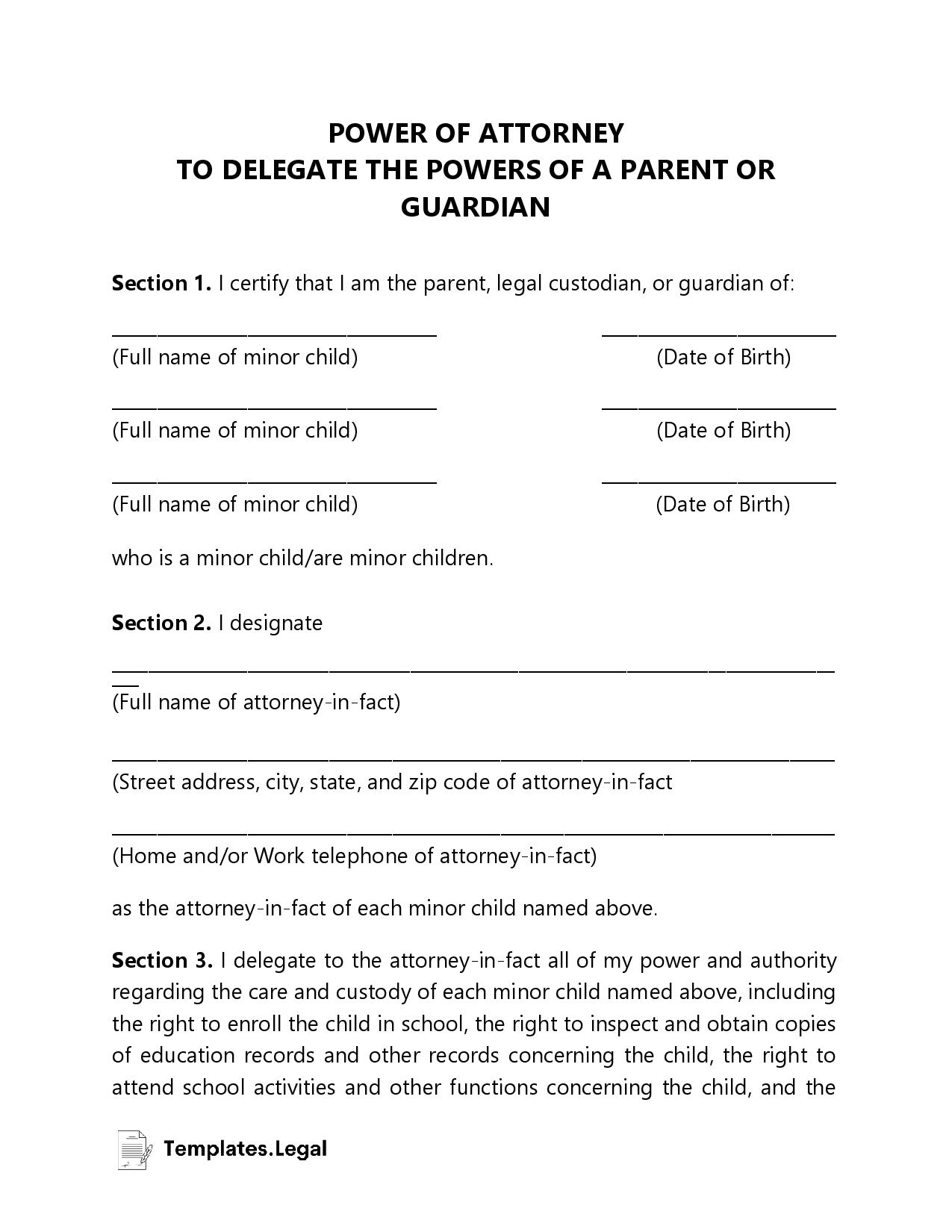 What Is Minor Power Of Attorney?

Minor power of attorney is a legal process in which an authorized individual (typically a parent or legal guardian) can give parenting rights to someone else for a temporary period. This is mainly used in times when parents or guardians will be away from the child, and someone else needs to perform the same role.

Similarly, the minor power of attorney allows babysitters to pick up children from school or make medical decisions on their behalf without needing additional authorization from the parents. This is most helpful in emergencies and for planned times when parents or guardians cannot fulfill their regular duties.

Does Minor Power Of Attorney Vary By State?

Laws are similar between states but rarely identical.

This means a babysitter cannot decide to give a minor medical treatment the guardian has refused.

States typically allow you to delegate powers when you want to transfer them, but scheduling it ahead of time can be more difficult.

Can I Get A Free Minor Power Of Attorney Form?

Yes! These forms are generally available online. You may also be able to get a free minor power of attorney template from your attorney or courts and government offices dealing with guardianships and similar matters.

Availability varies by region, so be sure to contact someone before you go visit.

The critical thing to remember here is that forms can vary by state. They may require different information, so you should always use the state-specific form instead of looking for a general minor power of attorney form.

If a child and temporary guardian will be moving across state lines for any reason, you may need multiple forms authorized in each state. This is somewhat harder than getting a form for just one state, so plan ahead if possible.

Places in states might accept a minor power of attorney form from a different state, but there’s no guarantee of that, and every possibility they’ll err on the side of caution instead.

Filling in the forms is usually as easy as writing the information in each blank area. This generally includes selecting the intended guardian, providing dates of birth, listing who the current parents and/or guardians are, and providing residential information.

Many forms also have additional sections that limit when or where someone has minor power of attorney. For example, a form may declare that the authorized individual only has the powers from 3 PM to 6 PM or September to June.

After filling in each of the blanks, which are generally self-explanatory, you need to get the form authorized by a third-party witness. In most states, this requires the services of a notary public and/or two independent, unrelated witnesses. Some states only have recommendations, so check the signing requirements for your state.

Notary publics are generally better than other types of witnesses when permitted. Among other things, they usually have a record of services (known as a “notary journal”) that can help provide proof if there’s ever a question about the validity of the signing process.

The document is usually complete once it’s witnessed or notarized and typically does not need to be filed with a court or any other government body. Guardians may enter it into court records just to preserve the paper trail, but this isn’t usually required.

Here are some common questions that people ask.

That depends on what you want your babysitter to do. If they’re only visiting your home for a few hours a day, you may not need to give them any power of attorney.

However, if you have a sick child who may need urgent medical attention, giving minor power of attorney to the babysitter can help them get emergency care.

You can give minor power of attorney to any adult who is not otherwise prohibited by law from serving in that capacity.

For example, if someone has a restraining order requiring them to stay at least 500 yards from a specific child, they probably can’t receive minor power of attorney for that child.

Yes. The person receiving the minor power of attorney needs to present the form every time they use it, so if the form gets lost or damaged, having copies is extremely useful for minimizing disruptions.

Some places only accept original copies, so you may need to sign several identical forms. For example, Utah directs people to make two original copies when delegating minor power of attorney rather than just one.

That depends on local regulations and, possibly, the specific terms of a custody agreement when a guardian takes over watching the child. In most cases, legal guardians have custody and the authority to assign minor power of attorney, but a custody agreement, court order, or state legislation could change this.

In short, if you’re in a complex situation like this, the best thing to do is consult a qualified attorney. They can help you with your specific case and look up any applicable legislation or custody agreements, then tell you who has what type of authority.